Vietnamese traditional village: For and Against 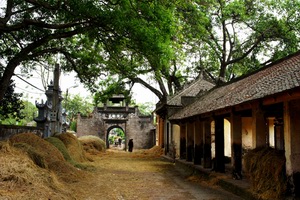 Faced with the socio-moral crisis born of three decades of war, the onslaught of the Western way of life, and the adoption of a free- market economy, we mobilize-as we did in the difficult years of the struggle for independence- old national values, such as those of the traditional village.

Over the centuries the Vietnamese nation has taken shape through the spread of villages (rural communes), politico - socio – economic groupings which have united the people in continuous combat against nature and foreign invaders.

A staunch feeling of communality binds men together within the family, the village, and the state ,which is indeed an ensemble of villages. This has allowed a population living on the cultivation of wet rice to build and maintain large water conservation works and to resist the invasion of powerful foes such as the Mongol armies in the 13th century. Such resistance has always been based on the thick network of villages.

In countries where defense relies on urban citadels , the fall of fortresses is followed by military disaster. But in Vietnam, on the contrary , each village a bastion.

In 1886, the resistance offered by the defense complex of Ba Dinh (Thanh Hoa), made up of five villages connected to each other by deep trenches, held at bay 3,400 French colonial troops supported by four gunboats. The siege, conducted by Captain (later, Marshall) Joffre, lasted as long as 35 days

By the same token, during the First Indochina War , the vast majority of occupied villages were on the side of the patriotic forces, which resulted in the French defeat at Dien Bien Phu

Ngo Dinh Diem vainly tried to dismantle villages through the creation of “strategic hamlets”, and US aircraft fruitlessly bombed two- thirds of the rural communes in both the north and the south of the country.

The communal feeling is strengthened by numerous additional factors. On the administrative plane , the village was an autonomous unit within the state. The central authority, represented by district mandarins, was satisfied with looking for each Commune a set of figures for head tax, land tax, and unpaid labor. It was up to the Council of Elders, assisted by elected agents, to meet those obligations.

A popular saying runs like this : “Royal decrees yield to village custom”

Within the village , beside its administrative structure, the population was distributed among seven kinds of groupings, including family clan, guild, hamlet.

The most original of these was the Giap. This vestige of the primitive agricultural commune was an egalitarian and democratic Male association, grouping men by age brackets regardless of their titles, functions, or fortunes. The passage of a man from a lower to a higher class gave him greater prestige.

In order to avoid a possibly stormy discussion, sensitive matters were in certain cases brought by the Elders before the Giap, in the hope of reaching a preliminary consensus.

Another democratic institution of village life, a vestige of the primitive agricultural commune, was the periodical distribution (every 3,4or 6 years) among registered male villagers of communal fields, which were inalienable. The privatization of this public domain took place essentially from the 12th to the early 19th century.

Communal lands brought the state more revenues (higher tax rates) than private lands did , and they supplied funds to pay agents of village administration, to help people without support : the old and widows and orphans.

On the eve of the land reform conducted in the 1950’s , there were still communal fields in villages.

The village is also the repository of the nation’s, spiritual and artistic traditions.

Its temples are the site of spring and autumn ritual celebrations, and provide occasions for popular communion and merriment. These temples house the majority of old architectural and sculptural works.

Many villages are proud of traditional handicrafts practiced by their inhabitants from generation to generation: silk weaving ,mother-of – pearl inlaying ,wood caving.

In the long periods of foreign domination (Chinese, French) national art which was in fact popular art, took refuge in the countryside. Many mandarins and scholars retired to their villages :their literary creations were both learned and popular .In spite of the positive aspects described above, the traditional village is far from being a Rousseau – esque model which could be accepted at the dawn of modern times. In the early years of the 20th century it was synonymous with oppression and extortions, intellectual backwardness, material and moral stagnation.

The democracy mentioned above was but a delusion. The reduced communal lands could no longer play their role. The communal hierarchy, Buttressed by Confucianism, divided society into five classes, the lowest of which was subjected to all duties and Corvees. The elders imposed their tyranny .The colonial administration attempted several reforms, which were merely formal.

Before the 1945 revolution , the archaic character of village structure was violently criticized both by Confucian scholars converted to the idea of progress and by young Western- Trained intellectuals.

The 1945 revolution ,the land reform of the 1950’s, agricultural cooperativization of the 1960’s ,and the resistance wars subjected the traditional village to profound upheavals. At present it is up to us to keep the lasting values of this heritage.