Specialties in Vietnam that horrify visitors

Let's challenge your courage through the dishes below: 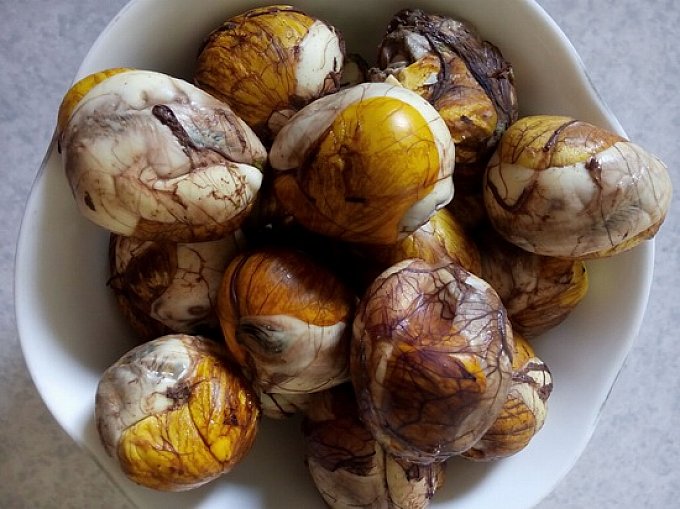 Trung Vit Lon is made from duck eggs when the embryo has developed into shape but not hatched for certain reasons. Trung Vit Lon is processed in many ways such as boil, fried with tamarind...is one of the popular dishes in Vietnam and considered a nutritious but scary food when the egg is opened with a full small duck with hairy parts.

Trung Vit Lon is sold in every street of Vietnam from rural areas to alleyways. Just a small tables, some chairs and a pot of boiled eggs and the shop is ready to serve. The Vietnamese has a habit of eating Trung Vit Lon in the morning or late evening.

This is a affordable dish, delicious and nutritious for the locals but for many international tourists it is really a horror when they see the Vietnamese eating Trung Vit Lon 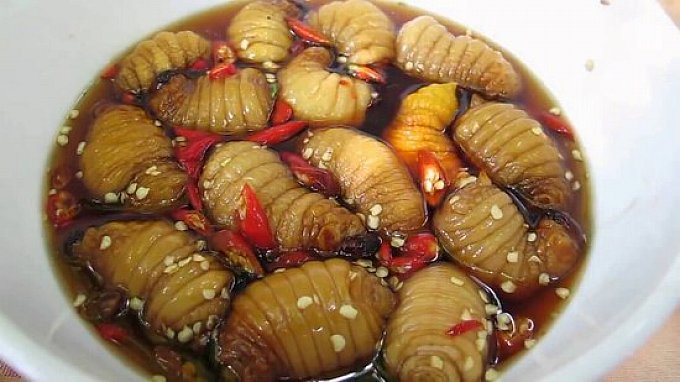 Duong Dua is one of the specialties in Vietnam however for many people only seeing the fat worms crawling about is enough to get the creeps let alone put into mouth.

Duong Dua is a form of beetle larvae. After the breeding season the beetle usually choose the healthy coconut, pierce a hole on top and lay the eggs in, the eggs hatch and the larvae grow by eating the young shoot of the coconut tree until the tree is pierced through. When the rot shoot falls is the Duong Dua are most crowded.

Although the coconut is spoilt by Duong Dua the worms are delicious and unique specialty in the coconut land of the Mekong River delta. Duong Dua is harmful species and breeding them is prohibited, it is said to enhance sexual ability for men and therefore very precious. One kg of Duong Dua usually cost 500.000 Dong (about 23 USD), out of season the price is even higher.

Especially in Tra Vinh area there are Duong Tra La (Date-palm worms), each palm tree has only 1 worm occupied until it grows wings and fly away. Just see the withered top of the tree one could find a worm inside. Duong Cha La is fat and meaty and people can fry or roast. However this is another dish that makes people frightened when they eat or eat with shut eyes.

Ruou Thuoc (Medicinal liquor)
Ruou Thuoc refers to a kind of traditional liquor in budget Vietnam tour packages in which people put herbs with raw animals or insects such as snakes, scorpions, lizards...in liquor and keep a long time for "medical substance" in the herbs and animals to dissolve in liquor.

The animals are usually soaked live, just roughly processed and not cooked. Particularly some animals are put the whole body in the jar like cobras. In addition to gecko, seahorses, bee...I myself have seen a monkey soaked in a big bottle of liquor.

The good thing about Ruou Thuoc is that the liquor is distilled the essence, herb is preserved for a long time and reduce toxicity of alcohol. Herbs to put in liquor are generally tonic, effective supporting body, stimulate digestion, enhance sexual ability...However if you have weak mind you should not try it as the appearance of the bottle itself is enough to make you horrified. 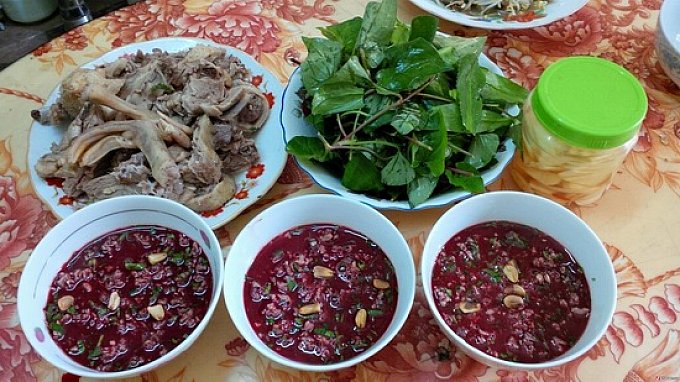 Tiet Canh (Blood pudding)
Tiet Canh is a popular dish of Vietnamese people, depending on each cook Tiet Canh is processed in different ways. Tiet Canh is made from animal blood, fresh after slaughtering, coupled with light fish sauce or salt water, thoroughly stir with chopsticks, mix with minced meat, Vietnam cheap tours and budget holidays spring onion, groundnut so that the blood coagulates.

After boiling the meat, the cook cuts some cartilage, gizzard, tripe, chop into small bits and put in a bowl. The substance on the surface of the blood is brushed off, enter some broth and mix with blood then gently and quickly sprinkle the blood on the dish.

Tiet Canh is also very diverse such as duck pudding, goat pudding, snake... however the most popular is pig and duck. Very rarely people have chicken and this type of poultry is fishy and can cause disease.

Tiet Canh is popular and can be found easily at road side restaurants in Vietnam but never seen again anywhere in the world and despite it's tastiness it can make you shiver when you see it. 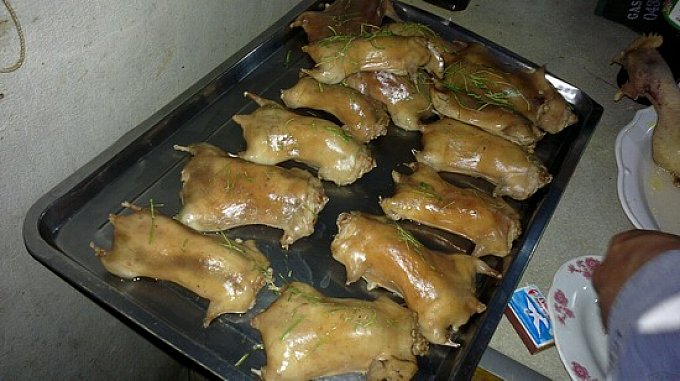 Thit Chuot
A lot of people see mice as the most hideous and frightening animals let alone eat them however mouse meat, especially rice mouse is served as a specialty in the menu of many Vietnamese restaurants.

Mouse is most delicious in the countryside at harvest seasons. Mice that live in the rice field only eat rice and they are clean and fat, farmers when cutting rice usually hunt and catch fat mice for food, the traps can be seen everywhere in the rice field during harvest time.

Mouse meat is white and tastes like chicken, a mice after quick processing will be cooked in many dishes from simple to sophisticated, hundreds of way to cook the rats such as sliced mouse with chili and coconut milk, fried minced mouse with lemon leaves, grilled sandwiched mouse...

The trapped mice are prepared by peeling the skin, cut off limbs, tail, nodes, throw away intestine. Only kidney, heart and liver are dried up. Mouse meat can be kept and preserved by salting in the jars to keep fresh, people also make mouse sauce.