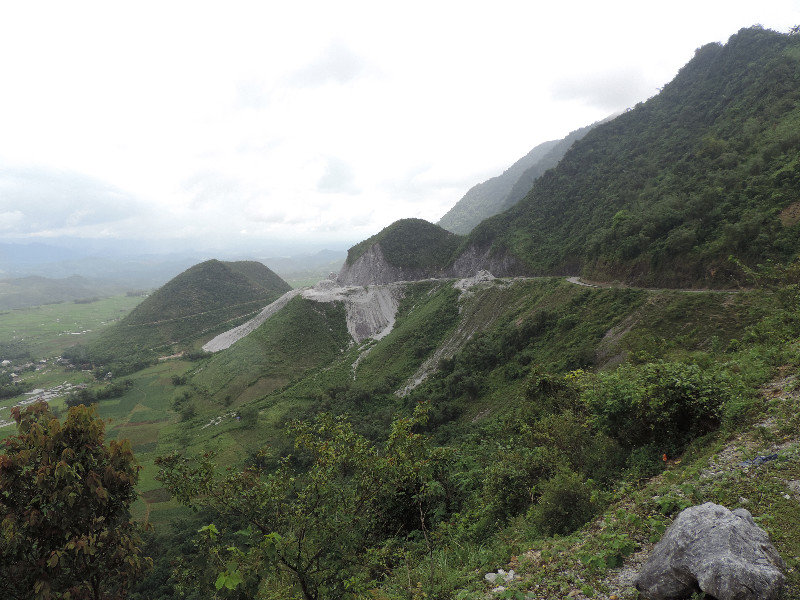 Moc Chau
(Son La province) While we waited for Jan's visa, we packed the most necessary things for a 2-Week trip, leaving the rest at the hillside and Sa are.
On the way to Moc Chau, we enjoyed the beautiful scenery with rice paddies, mountains / hills and the various locals. We have already drunk so many sugarcane drinks in Vietnam and now we have seen for the 1st time the plants themselves. We were not even sure until we asked the saleswoman. You have to peel the cane first before you can use it. We bought a whole sugarcane for 10000d. The saleswoman is cut into small pieces for us so that we can just chew the juice out. Also we saw that very young children (about 6 or 7) already guarding the buffalo herd. Very small children are placed in a basket behind the mother's back and so they go to the field.

3km before Moc Chau village we found the Pha Luong Guesthouse. The whole Guest House Sahr very classy. We thought it would cost a lot more. In the evening we tried the specialty of Moc Chau "Be Chao" (translated little cow = veal). As always Vy first asked for the price before  we ordered something. Suddenly she broke soup, salad, pickled in vinegar vegetables, rice and a plate Be Chao. We thought it's worth the price, but after dinner we wanted to pay and she expected us for the dish Be Chau 140000d (is very much for a plate), plus everything else. So we had to finally pay on 200000d. We thought they kidding us, but when we asked in our Guest House, they said that's ok like that. But we find it an impudence that we simply should provide, without that we ordered it. Janu ... but we were tired. 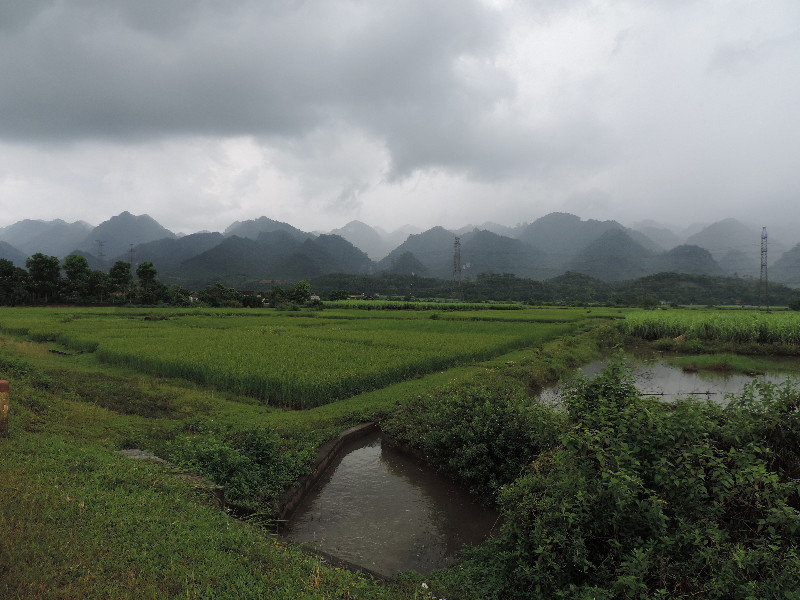 The next day we got up early to see the sunrise. Unfortunately, on the day of fog, so no beautiful sunrise. We packed our things together again to draw later on. After breakfast we toured all the sights. We had quite the way to the waterfall ask because it was not really labeled.

In return we saw women wearing a wooden blind with his head. How strong must the Nackensein to so carry a heavy bag can? (see photo) Arriving at the cave we were very disappointed because it's not really a nice  Cave was. Perhaps we have seen too many caves on our trip. So we went already back on quickly. Our next stop was the Tea Heart. That it already rained all day, it made the search even more difficult. When we arrived and the tea factory doorman asked where the heart is, he said we should come to the house and wait until it stops raining, because it just rained heavily. He offered us tea and we could rest a bit us. Luckily it stopped after a while raining so we could visit the heart.
Back at our Guesthouse we tied our luggage on a motorbike and drove towards Mai Chau.

The grandmother had already Vy really liked and then the woman, so we decided to stay straight without asking further.

On 1 evening they cooked the food for the tourists, but after we asked them for us their own food  cook, so we were able to try their food. At 18:00 clock we heard a drum. This means for a specific dance group for young women and men to make themselves at 19:00 willing to maintain their appearance. We wanted to also go look. The grandmother said that it would cost too much if we only 2 would rent the whole dance group. Since the niece was also in the dance group, brought us the grandmother at 19:00 to the Guest House of the performers group. We stood in the distance and watched. The tour guide invited us to enjoy with them. So we saw again different traditional clothes and dances.

The next morning we ate breakfast with us and watch the daily life of the villagers. Since it was raining heavily this morning, was fun for us to watch the people on the scooter. Just drove with one hand and the other hand they held the umbrella. The woman sat down with us and we chat for hours together. Since she lived very far from the city, they still knew quite a bit because they took all the information on the TVs. We learned that they were originally Thais, but they are in Vietnam since 5 generations  and they talk together Thai. This village was originally founded by the rice workers. At that time they had set up tents in order to guard their rice fields can. Then the community informed on the land. Per person you got a piece of land. So who have then had more children, received more land. So they built the houses and the village was established. There were 2 villages, the others are already so built for tourists, gave restaurants and shops. At noon it stopped raining and we we took our scooter to visit the surrounding area. We drove through the village 2nd and we were glad that we were at our homestay. It does not look more out originally. The scenery was quite visible. The wide rice fields and then suddenly a "mountain", bamboo houses obliquely lay almost in the water, and children who fish in the river.
Back in the homestay, trained the woman Vy weave. After about 30min Vy could weave itself already. It made her so fun is that as long wab until it got dark.
For dinner we had a huge feast. The man sat down to us and Jan rice wine at bat.
The next morning we had already  further, so that we were able to achieve all our goals.