Hoi An and Cu Lao Cham

At 14: 00h we took a bus to Hoi An, we hired at the same hotel the day before. 20min stop near Lang Co beach where Paul took a dip. We got to Hoi An to 17: 30h and stayed at the Hotel Thien Nga (highly recommended). Private Vietnam tours. We took a dip in the pool and then went for a walk around the small town. Hoi An is a gastronomic paradise, with dishes that are not seen in the rest of the country. We dined on a tasting menu that included some specialties such as White Roses (prawns wrapped in rice pasta), Wonton (meat in the center of a crispy batter) and Cao Lau (noodles in broth, pork and crispy bacon bits). On the river bank there are numerous restaurants and many have cooking classes. In some of them they serve chilled beer barrel 3.000D. 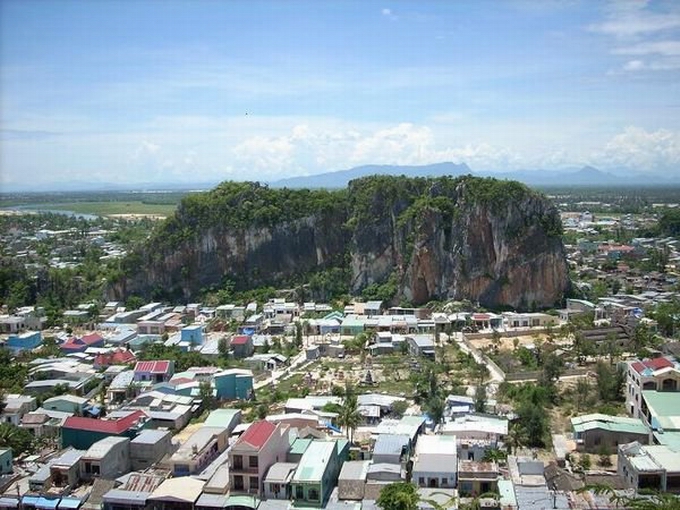 It is a charming and tourist population. Highlights some houses of the Chinese merchants who settled here during the heyday, its temples and a covered bridge built by the Japanese  in 1593, as a means of communication between the Chinese and Japanese communities. The old part of the city has preserved its streets have kept intact the traditional buildings of past centuries.

Hoi An is also surrounded by beautiful natural landscapes, rivers, islands and paradisiacal beach. The next day, we rented a scooter (80.000D / day + 10.000D / town) and go to the Marble Mountains (15.000D / p), five hills representing the five ritual elements, gold, wood, water , fire and earth. It is a place very popular Buddhist prayer. They are about 20 km from Hoi An. It has 2 separate entrances, one walk and another walk out and you have to climb a lot of stairs and through the various pagodas, temples and caves. From the top there are beautiful views of the vast China Beach. 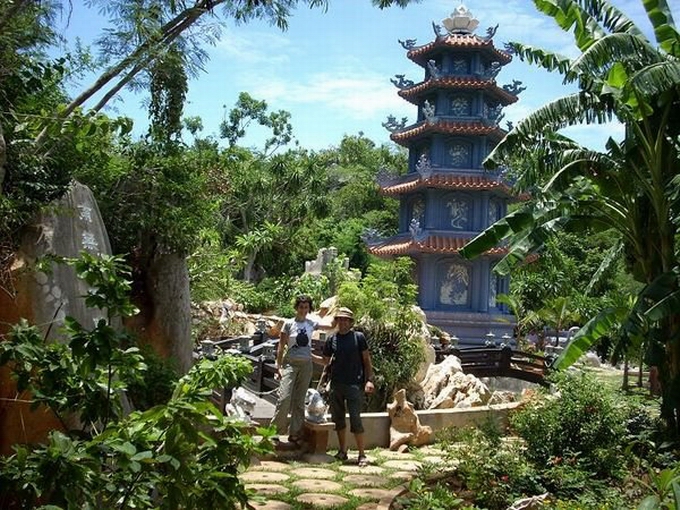 After seeing this magnificent beach from above, we could not resist the temptation to take a bath and went straight there. There are restaurants where good seafood at the edge of the beach eats. Then we went on the bike to others closer to Hoi An beach. All the beaches are virtually untouched and uncrowded, only  there are a few resorts. It is the ideal place to enjoy the sea.

The day before were asking prices of some tours to visit the Cham Islands. Prices are not expensive (20 $ -1 day -2dias $ 35, including transportation, accommodation, food and snorkel) but decided to go on our own and try his luck, although not find much information on how to go, accommodation, permissions, etc.

We knew at 7: 00h he left a local boat to the islands for some River pier. We went a little early to get it and it was difficult because we asked people around us and directed to one side and others to the opposite side, plus lots of boats coming and going elsewhere. Finally, we found our boat (5.000D / p) (the stop is in front of the restaurant Café des Amis). The boat departed after the locals had loaded on the ship motorcycles, bikes and all kinds of things like eggs, baskets of fruit, vegetables, etc .. A few minutes later, when we thought we were heading for the islands, stop the boat beside the river where we waited another larger boat and  we had to change from one to another (people and all cargo, which took a while). We continue navigating through the river before reaching the mouth, stop again to move the ship up more people and goods and pass a police check on Cua Dai Tran Kiem SOAT, Don Bien Phong 260. 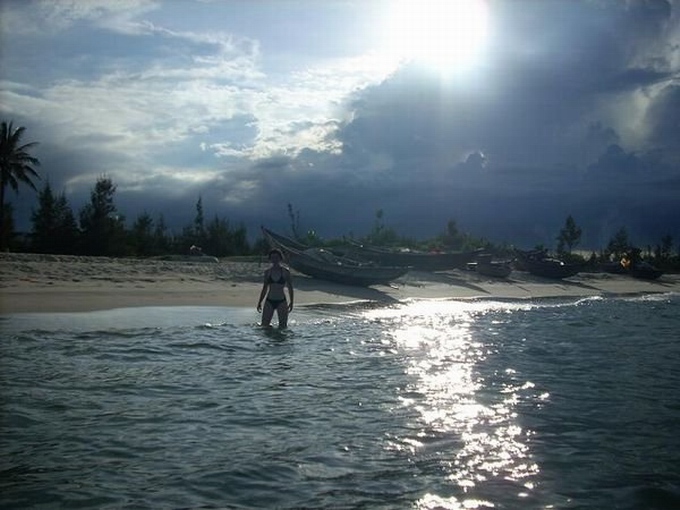 Suddenly, one of the policemen was set that we were foreigners (it was not difficult, were the only ones) and we started to speak Vietnamese. Luckily there was a girl who spoke English and helped us. We asked a photocopy of passports to register our entry to the islands. Then we were told that we could not sleep in the islands without an invitation from a local, so we had to return on the same day and someone had to do responsible for us during the stay. Eventually the skipper was responsible (thank goodness). At 10:30 h we arrived at Cu Lao Cham, the largest island and the only inhabited. Alli girl talk to the pattern and said that we would try to get permission to stay 2  days on the island. At 10: 30h the boat came to Tan Hiep (one of only two villages on the island, 2,400 inhabitants).

We went straight to one of the few guesthouses there and convincing a policeman (giving another copy of the passport), we were under the tutelage of the lady of the guesthouse. We stayed there on Ngan Ha Guesthouse in Bai Lang. A 40m pier.(150.000D / hd c / b). (Very basic). We were told that we go anywhere we had to bring someone of the family (check then you do not need). They also warned us that we could not climb the mountains because the island is a military base and much of it is occupied by the army, hence much control to enter. There are signs of restricted zone around the island. In the end, all sorted !! 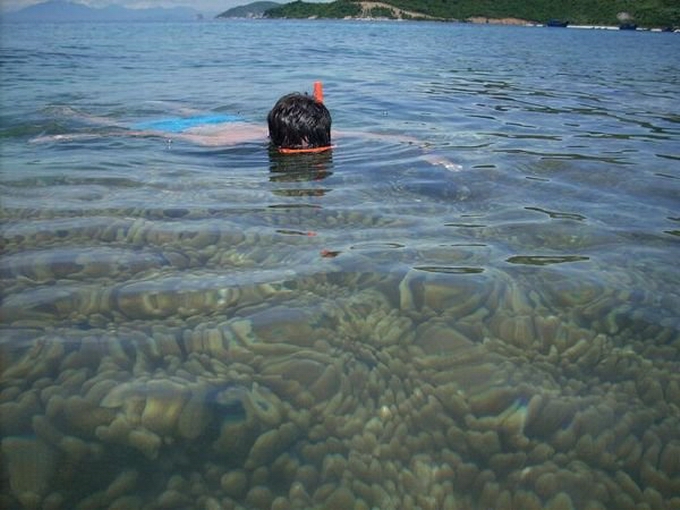 After arranging everything to stay there a couple of days and leave  backpacks in the room, went to a secluded beach 500m from the village to refresh. Was terribly hot and we came a great bathroom.

In the guesthouse we hire a boat for a tour of 3h, touring the island and snorkeling (200.000D / boat). Picked us up at 14: 00h and we were going, the captain and three girls on the island that were to be relatives of the captain, taking advantage of the trip came too. The island is not very large, has 8 beaches on the west side and the east are all cliffs. There is a government program to protect the environment on the islands (corals and marine life), to prevent local fishing sweep away everything. There are several areas to snorkel and see coral and colorful fish. The coral is shallow and you can see even without diving into the water. 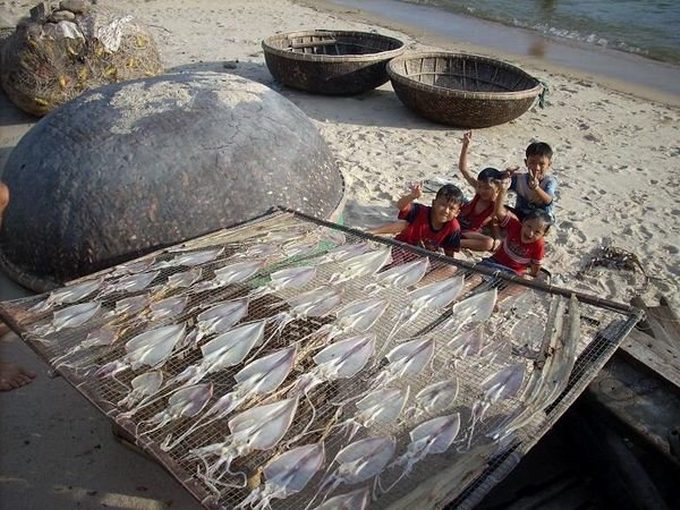 Before dinner we visited a pagoda of the year 1749, which was close to the people. Inside there was a greater and nearly blind monk who invited us to a delicious tea while we were doing him company until dark.

At night we do not rest well because the bed  He had no mattress and slept directly on a table. Moreover, from 5:30 to 6: 30h put radio speakers that are heard throughout the town, so that everyone wakes up (even those who do not want so early). We came so well because we could leverage more day. So we walked to some beautiful and secluded beaches. You catch out of town the only means there tarmac and 2.5 km this Bai Chong beach, which is accessed through a stream with a few steps down to the beach, which has a lot of palm trees and some bamboo houses which they prepare food when tours arrive, but as soon we have to ourselves, with its white sand and clear waters. The guard who looks after the beach charged us 10.000D/p and can use toilets and showers.

Back we stopped at the beach closest to the people, and we were snorkeling at the foot of the beach with some coral and plenty of gorgeous, starfish and even anemones and clownfish colorful fish. At 11: 30h back to town just in time for  take backpacks and take the public ferry was waiting. We no longer back in control of the police had no problems and we got to Hoi An safely.

We squeezed a few beers on tap frost with grilled prawns and delicious papaya salad off the port (we are very heavy but in Hoi An have the best cuisine in Vietnam). Then we bought a direct overnight bus ticket to Ho Chi Minh for a company (formerly Saigon) ($ 14 / p), leave the backpacks in the hotel, we took a shower (15.000D / p) and went for a stroll around town 18h until the bus came to pick us up at the hotel (we spent all night en route).