Although they are only small bridges across the rivers but thanks to special architecture, ancient beauty; The covered bridges that feature typical beauty of each land of the country, and also the works bearing the national cultural identity. 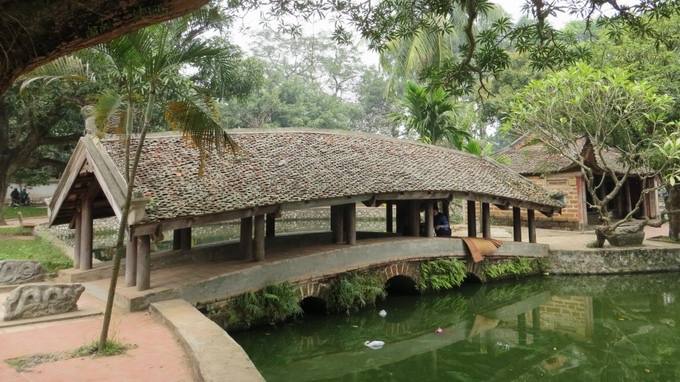 1. Covered bridge of Thay pagoda
In the architectural features that make up the characteristic of Thay pagoda (Sai Son commune, Quoc Oai district, Hanoi), it is impossible not to mention two ancient covered bridges of Nhat Tien and Nguyet Tien. These two bridges are located on either side of the front yard of the pagoda, in which Nhat Tien bridge connects the pagoda to a small island, on the island there is Tam phu temple.
According to historical records, these two bridges were built by Phung Khac Khoan at the beginning of the 17th century, after the trip to China.
Legend has it that Phung Khac Khoan used feng shui art to explain that Thay pagoda was built on the dragon's forehead, Nhat Tien and Nguyen Tien bridges have curved shape, which is a pair of dragon eyelids. Overall, the two bridges were built under Thuong Gia Ta Kieu architecture (house on the upper, bridge under), each bridge consists of 5 spaces, under the construction of rolling stone on the construction of wooden house frames with tiles.
On both sides of an open bridge, there is a low railing that is widened to serve as a resting place for the guests. Before each bridge, there were a pair of ancient stone dragons.
The covered bridge, which is a popular architecture of villages, is rarely present in the temples of the ancient Vietnamese. Therefore, the appearance in a Buddhist space has brought special to two tile bridges of Thay Pagoda.
The naming of the bridge based on the symbol of Japan - Nguyet (sun, moon) also means that the two civets symbolizing the two sides of Yin and Yang harmonize to create a balance for heaven and earth and all things. 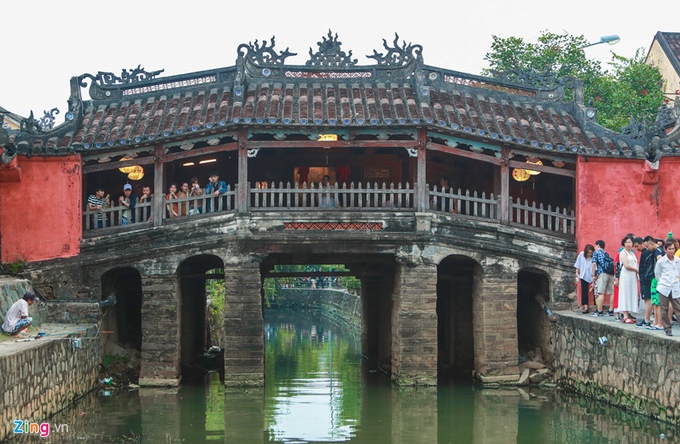 2. Hoi An Covered Bridge
Hoi An covered bridge or Chua Cau was chosen as the symbol of Hoi An city, appearing on the 20,000 Vietnam Dong bank note. This bridge was built by Japanese merchants who came trading in Vietnam in the 17th century. The bridge is about 18m long, squeezed through a stream flowing into Thu Bon River.
The mark of Phu Tang culture on the bridge shows in the animal statue at the ends of the bridge, one end is a dog statue, one is a monkey statue. On the main door of Chua Cau, there is a large sign that touches 3 Chinese characters called Lai Vien Kieu (meaning the bridge of far-flung friends). The middle part (called the pagoda) worships a wooden statue of the North Emperor Tran Vo - the god of protection of the country, who specializes in handling floods, giving happiness to people.
The Cau Pagoda was chosen as a symbol of Hoi An city.
Along with the time, the architecture of the Cau Pagoda is a Vietnamese style with the roof of the yin and yang tiles covering the bridge. cheap tour Vietnam 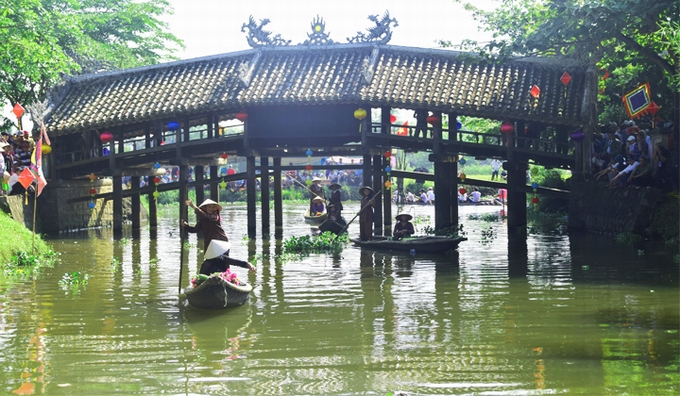 3. Thanh Toan covered bridge
Thanh Toan tile bridge is about 8 km southeast of Hue city in Thuy Thanh commune, Huong Thuy district.The bridge is designed in the style of "house on the upper, bridge under”. The body of the bridge is made of wood, on top of a glazed tile roof.
Like Hoi An Bridge Pagoda, Thanh Toan covered bridge is divided into sections, each as a small room in a big house. The bridge is about 17 m long, 4 m wide and is divided into 7 sections with the middle space where worshiping Madam Tran Thi Dao - who contributed money to build bridges for the villagers to make their way back and forth in the 18th century.
Thanh Toan tile bridge is one of the bridges that belong to the rare and high artistic value in Vietnam. 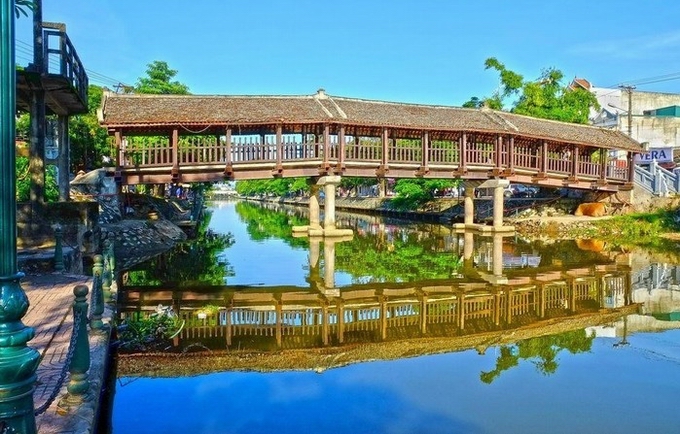 4. Phat Diem covered bridge
Phat Diem covered bridge was built across the An river and is located in the center of Phat Diem town, Kim Son district, about 30 km from Ninh Binh city.
The bridge is shaped like a rainbow, the roof is covered with tiles, on both sides are two rows of wooden pillars, and the solid woods are very strong railing. The bridge has 3 spans, each with 4 sections. The length of this bridge is 36m, the width is 3m. On the two sides of the bridge there are steps, only pedestrians can cross the bridge. The roof of the brided is covered traditional red tiles of the Northern Delta region.
Compared with Hoi An Bridge Pagoda and Thanh Toan tile bridge, Phat Diem covered bridge has a gentle and serene appearance, reflecting the special creative talent of Catholics. This is considered a rare bridge and has the highest artistic value in all kinds of ancient bridges in Vietnam. The bridge has both transport function and an ancient house, moreover, it 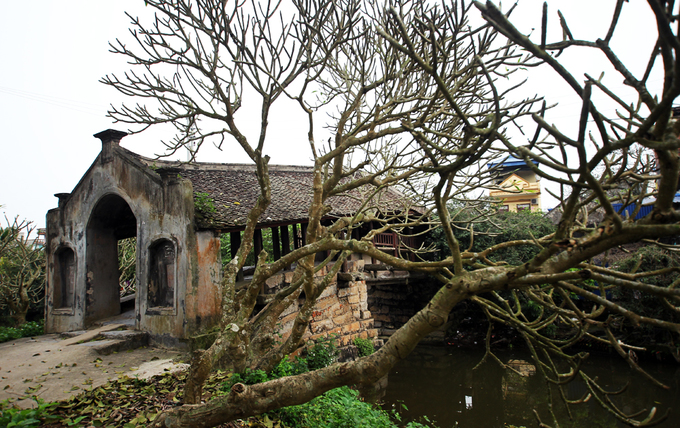 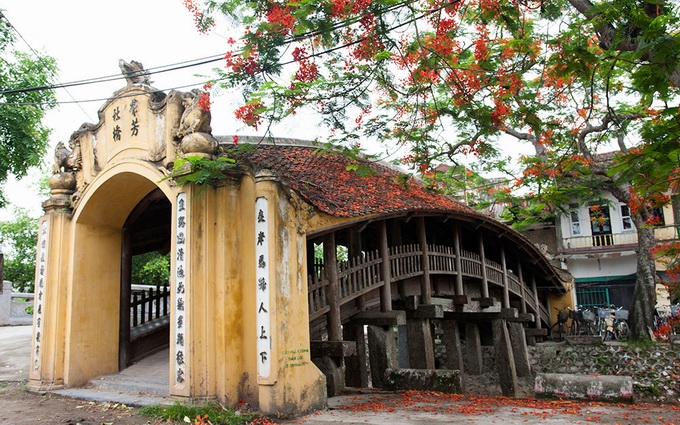 6. Covered bridge of Luong pagoda
Also in Nam Dinh, the bridge of Luong pagoda is located in Hai Anh commune, Hai Hau district, across Hoanh river, more than 100m from Luong temple. The bridge of Luong pagoda is located in the cluster of historical-cultural relics "Luong pagoda, Covered bridge and Phong Lac temples" famous for the ancient Quan Anh land.
The structure inside the bridge is simple but firm, the bridge has 9 bends like rainbow on 18 strong rock pillars. On the stone pillar is a system of horizontal bars to support the beams. The bridge floor is designed as two distinct parts. The bed of of the bridge is 2m wide, consisting of many lumberwood bars located on the row of bended beams, and there are many shorter woods with rounded edges to create steps for pedestrians to climb up and down. The two sides of the bridge are curved corridors so that pedestrians can stop to sit and rest, the outside of the corridor is a wooden railing.